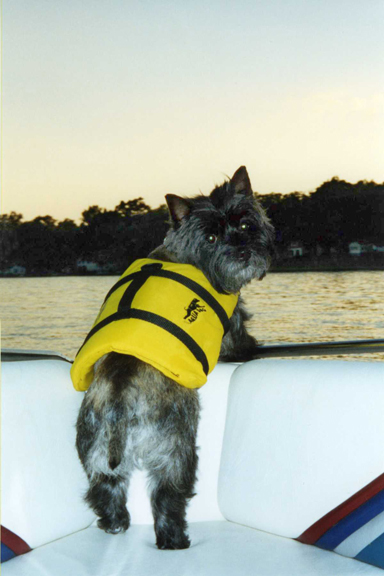 We have all heard the phrase “actions speak louder than words.” Full of attitude, lots of “chutzpah”, and love for his two dads, Max needed no words to make himself understood. With a look, a bark, or just a stance, you always knew who had the upper hand. A lover of treats – but not of pats, Max ruled the roost, both at home and at Life Story Network.

Max’s story “sort of” begins in 1988. At least that was when Jerry began talking about adopting a dog. Several months later a stuffed German Shepherd puppy arrived at Jerry and Jon’s home on Tartan Circle. Nice, but not like the real thing. In the fall of 1992, after selling the condo on Tartan Circle, Jon and Jerry moved in with Jon’s parents, while they waited for their new home to be built. The subject of adopting a dog came up again, and a stuffed animal was not what Jerry had in mind. Jon wanted a large dog, but Jerry had other plans – a small dog was what he wanted. The Westie was Jerry’s original choice, but that thought was abandoned after much research. Then one fall evening, Bill Mains stopped by to visit Jon’s parents and brought along a Cairn Terrier named “Magoo.” He was just the right size, cute as a button with just a bit of attitude. Jon thought this was a breed worth exploring, although later he claimed they should have paid more attention to the “attitude” part. When Jerry arrived home that evening Jon told him about Magoo, which sent him on a new quest.

After much research, they found the Barberi Hedge Kennel in Grand Junction, Michigan. Gail Kuzac, an older, rather stern woman, was the proprietor, with a house full of Cairn Terriers running free – twenty six of them at the time. These were not JUST Cairn Terriers, they came from a long line of champion show dogs. Needless to say, Gail was quite particular about what kind of homes her babies went to and Jon and Jerry had to go through an extensive interview process

Max (full name Barberi Hedge Maximum Force) was born on January 3, 1993, the only surviving puppy in a litter of two. This puppy’s lineage was pure royalty, with American and Canadian Champion parents, Barberi Hedge Dee Cee Dee and Barberi Hedge Henry Higgins. A few days later, Jerry received a call from Gail. He and Jon had been deemed acceptable and were about to become “parents.” Jon and Jerry got their first look at Max in late January, and were amazed at how big his ears were. So was his attitude! Strutting his little puppy stuff, he soon had melted both their hearts.

On a cold, snowy day in late February- at the age of 8 weeks and the weight of 4.2 pounds – Max arrived home. He loved the snow and loved “supervising” the building site for their new home. Running through the house – with Jerry right behind making sure he didn’t step on a nail, or get into trouble – Max let everyone know that this was to be his house.

Jon’s parents lived above the funeral home in Vicksburg and Max made it his personal domain. At the mention of the work “spook” Max was off and running downstairs, loudly barking to scare each and every one of the ghosts and goblins away. Starting with the main chapel, he would go around the perimeter of every room, making sure the “phantoms” were gone. If the doorbell rang or the garage door opened, off went Max, ready to investigate, and barking loudly, just in case.

Having spent much of his life on a dairy farm, Jon’s dad thought that Max should be an outdoor dog. Right! In about three weeks, Max had completely won Grandpa over and was soon being called “Maxie.” It became somewhat of a competition between Grandma and Grandpa to see who could spoil Max more.

April of 1993 saw Jerry, Jon and Max moving into their new home on Mandigo Road. Life was good and Max quickly settled in to a life of love and leisure. With the nearby marsh and the wildlife, Max loved his walks outside with his dads, and all the other activities they did together.

That December was Max’s first Christmas and his first encounter with a Christmas tree. When he began having health problems, one of the things Jerry and Jon thought was maybe he was allergic to the tree. After a visit to the MSU Veterinary Hospital in East Lansing, where little Max almost died, it was discovered that he had a chronic skin condition, complicated by a food allergy, that would plague him all his life. The vets suggested a new diet for Max…restricting him to venison, rice and potatoes and other pure, no-additives foods. With venison a little difficult to find, they settled on baked (non-processed) turkey and boiled potatoes. By the time Christmas Day rolled around, Max was healthy enough to open Christmas presents. He loved tearing the wrapping paper off, trying to get at whatever treat was inside. The gentleman that he was, he would open one present, play with it for a minute, and then open the next one.

Definitely a full-fledged member of the family, Max was part of every holiday, family gathering and outing. Like all “sons”, Max was sent to school – obedience school. Well, the first time through was not too successful so Max took the class again. When it became evident that it was Jon and Jerry who would have to be trained, with Max doing the teaching, the obedience class was dropped.

Max knew what he wanted and did not have to be taught. He loved to play hide-and-seek, and to be chased with a paper bag – which if he got would be ripped to pieces. One of his favorites was to have Grandma and Grandpa Durham chase him with pots and pans. However, ordinary dog tricks were not his thing. Playing fetch was definitely beneath him. He would watch you throw the ball and then sit down with a look on his face that clearly said, “You threw it, you go get it.”

Jon, Jerry and Max eventually made a permanent move to Indian Lake. The “lake years” were good for Max. It was here that Max learned to rid the world of geese…knowingly ignore the evil swans…and inconspicuously try to “wander off the ranch”. Although he was not really a water dog (he swam like a rock), you just had to say the words “boat ride” and Max would run to the door, wait for his life jacket to be put on [he knew how adorable he looked in his life jacket…yellow was his color], and then off to the dock to wait to be lifted into the boat. He would “look for the fishies” and run from stem to stern thinking that he might be missing something at the opposite end of the boat.

To say Max was spoiled would be an understatement. He loved to go for car rides and let the breeze ruffle his carefully groomed fur. And the best things were cuddling with his dads on the couch and sleeping on their bed. For the last two years, Max was able to go to work almost every day with Jon and Jerry. Max ruled that office with an iron paw. He loved to sit or lay under your desk or table, daring you to touch him with your foot. One unlucky visitor, whose foot tapped Max, found himself with a hole bitten right through his shoe. He could sometimes have one little treat from the office staff, but that didn’t mean you could pat him. He was doing you the favor by eating your treat. But when it came to Jon and Jerry, Max was all kisses.

Like most “children”, Max had selective hearing. Standing nearby and calling his name evoked no response, but go to the other end of the house and quietly open a food container, and there he was. Max was not a morning dog. He liked to sleep in, while Jon and Jerry got ready for work. Only when he heard his breakfast being prepared would he even think about getting up.

With as much personality as attitude, and a slight cocking of his head, Max appeared to understand every word you said to him…he just chose whether to comply or not.

In early November 2005 Max once again made a visit to the MSU Veterinary Hospital. This time he was diagnosed with liver cancer and Cushing’s disease, caused by a tumor on the pituitary gland. Surgery removed the mass from his liver, which was not cancerous, but other complications set in. With cancer found in his intestines, Max was sent home to recover. Progress was slow and warranted visits to his own vet and back to MSU. But Max was a trooper and went to work with Jerry and Jon every day, still trying to talk some of the staff out of a cheese cracker or other small treat. Max returned to MSU when the incision from his surgery ripped open, and true to form, nipped at the ER doctor. Although the surgeon had done everything she could, there were no more options left. Happy to see his two dads, Max showered them with kisses, perhaps telling them that he knew it was his time and it was OK. Max died peacefully at the MSU Veterinary Hospital on Friday November 18, 2005 with both his dads by his side.

Small in size but big in attitude, personality and life, Max lived his life on his own terms, terms that Jon and Jerry were happy to live with. Max certainly made an impression on all he met and has left an emptiness that will be hard to fill. Max will be deeply missed and fondly remembered.