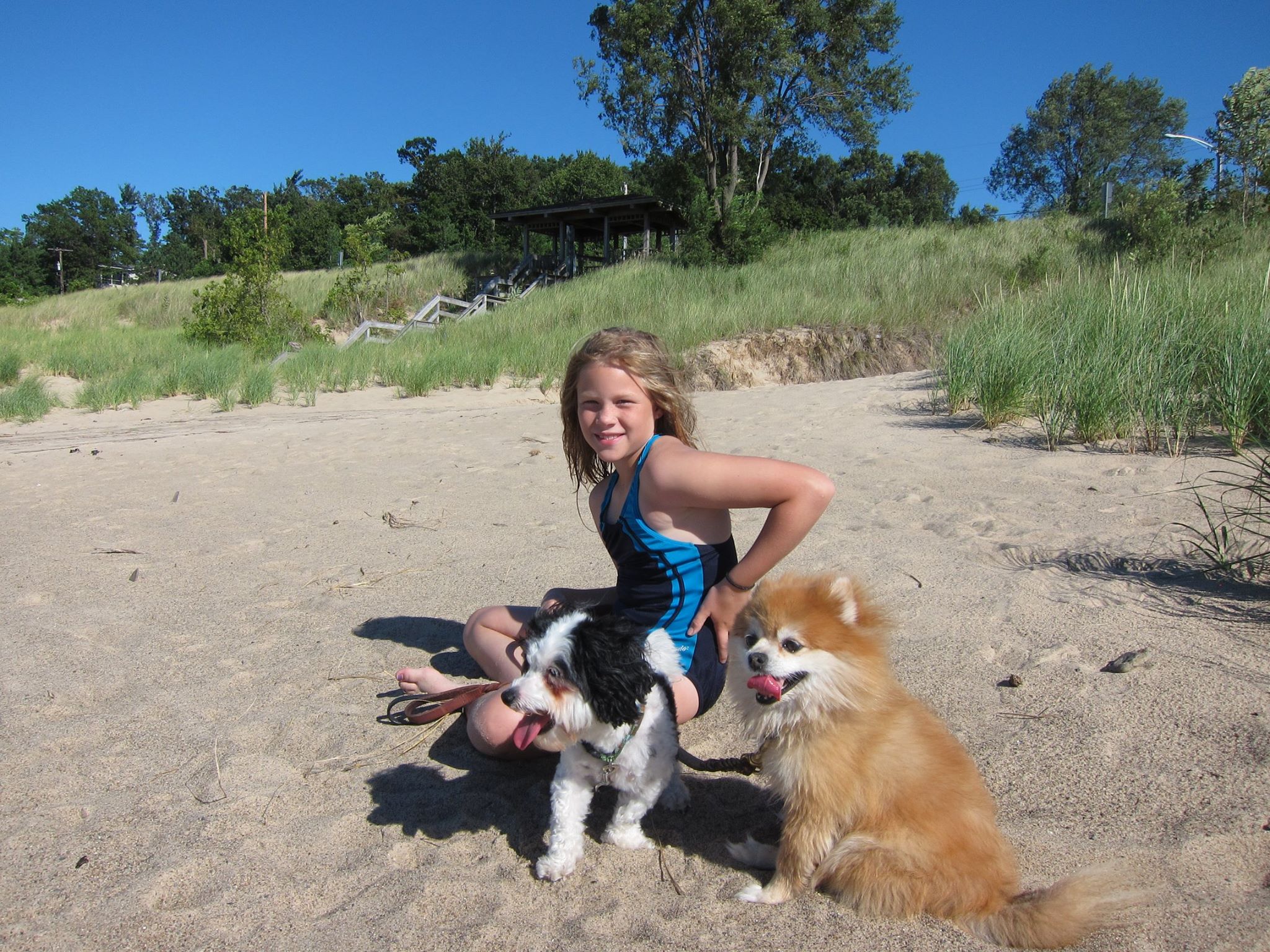 Phoebe lived with the Rhone’s for 12 wonderful years. Her original owners did not want her and would let her out their front door hoping she would run away. The Rhone’s returned her repeatedly until one day they said “no you keep her we don’t want her”.

Her first days with the Rhone’s consisted of her peeing all over the house, stealing food, sneaking out the front door, back door, back yard gate, and barking incessantly all day and night. Despite eventually being fully obedience trained Phoebe’s wanderlust nearly killed her. She escaped the backyard and was hit by a truck on Racine Avenue. To the day she died she was missing fur on her flank with clear marks of the tire tread visible where the hair never grew back. Phoebe was afraid of thunder storms and one summer night at a Michigan vacation house a storm came and Phoebe crashed through the screen door and escaped. She was lost in the storm for hours. Eventually the Rhone’s found her huddled under a bush deep in the woods.

The Rhone’s worked with numerous obedience trainers and a citronella collar to curb her barking and curb her desire to take off. She was the type of dog who would escape, take off running, and never look back. She barked at every bird in the sky, planes overhead, noise in the alley, noises in the house, and she barked when she wanted a member of the Rhone family to do something for her. She was a master manipulator and the Rhone’s were very well trained to attend to Phoebe’s every beck and call. Needless to say she was spoiled rotten and always got what she wanted. Phoebe never stopped barking however after about 3 years she did stop trying to escape the Rhone house.

Phoebe was a master food thief and resource guarder. She would regularly jump up on the table or counter top (using a stool to access the counter) and help herself to just about anything. One Christmas she stole the fully cooked beef tenderloin off of the kitchen island while it was resting. Ross Rhone found Phoebe and the tenderloin on the kitchen floor. Phoebe was licking the juices but had not started eating the tenderloin. Needless to say Ross Rhone kept that incident a secret to the rest of the family. On May 11, 2016, three days before her death, she stole a chicken taco from Tacos Erendira off of the kitchen table and proceeded to eat it while lying down in her bed. Phoebe would bite your hand off if you tried to take any food away from her. There were times when brooms and sticks had to be positioned between Phoebe and the food she stole in order to create some distance so that the food could be retrieved safely. She would routinely have diarrhea all over as a result of her thieving ways.

Phoebe had many attributes. Pomeranian’s are descendants from the Spitz family and despite her tiny stature, she was a sled dog. One snowy day the Rhone’s hooked her up to a sled and Phoebe pulled Sarah Claire Rhone and Hollis Rhone down the 33rd Place Boulevard. Phoebe was always happy and had a smile on her face. She enjoyed swimming in Lake Michigan during the winter and would regularly sit outside during snowstorms letting the snow pile up on her back.
Phoebe was a highly intuitive dog and quickly upon joining the Rhone family she deeply bonded with Sarah Claire Rhone. Phoebe was keenly aware of Sarah’s feelings and when Sarah was sad Phoebe would always make an effort to cheer her up and it always worked. Phoebe helped the Rhone’s parent Sarah during her early childhood and was always a source of comfort for others who were sad or in pain. Phoebe always showed concern for anyone who was not feeling well. At times she would show her affection by licking toes.

Phoebe was also a dominant female and she took it up on herself to keep order in the Rhone household. She was the traffic cop, food police, and always kept Tank – the Rhone’s 104 lb. Labrador in line. Despite her boss personality, Phoebe always treated the Rhone’s numerous foster dogs and cats with respect and kindness. In 2009 the Rhone’s adopted a puppy mill survivor dog named Lulu and Phoebe was responsible for teaching Lulu how to be a dog, how to play, and how to relax.

Phoebe was humanely euthanized on Friday May 13, 2016 because she had intractable pain from intervertebral disc disease. Her contributions to the Rhone family over the years are too numerous to list. She was deeply, deeply loved and Phoebe will be profoundly missed.

In lieu of gifts and flowers, please foster a dog in her honor.