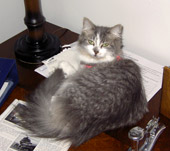 I was introduced to Pepper when she was a mere 8 weeks old. Her owners had to give her away. She was brought into my place of employment, and the minute I saw her I knew I wanted her. It was perfect timing for me, as I had just moved into my own place and was lonely. Pepper filled that void. I worked midnights and when I returned home in the morning she was faithfully waiting for me. She would snuggle up with me and knead her nails into my head. I endured the pain of her little nails because she was happy. She would purr away.

Through the years she grew more beautiful and sweeter with each passing day. Pepper’s favorite thing was to play in all the grocery bags when we would come home from the store. She would eventually get tired and curl up inside of one and go to sleep. Her playmate was our other cat, Shadow, and although Shadow would irritate, her they were friends. Shadow misses pepper too.

A few years ago I found out that Pepper had a rare blood disease. Her red blood cells would multiply at an accelerated rate and she would have to go to the vet and have blood drained out. She was also on medication daily to help slow the reproduction of the cells. On the 7th of March we took her to the vet and had her drained. The next morning her breathing was raspy. We returned to the vet and were told she had fluid in her lungs. She was given Lasik and some steroid and her breathing improved. I was also informed on that visit, that due to her condition it was not uncommon for blood clots to develop. On the 18th of March I had to rush my beloved Pepper to the emergency room. The vet came back and told me the diagnosis was grim. Pepper had developed a blood clot in the main artery of her heart. There was nothing that could be done. This seemed more than I could bare. I had to make the painful decision to let my princess go. I stayed with her through the whole thing and held her tight, telling her that everything would be okay now and how much I loved her.

My Pepper was returned to me from the wonderful people at Faithful Companion that evening, and although it was still very difficult for me to imagine my life and home with out her wondering around behind me, I was so happy to have her back home where she truly belonged.

Thank you Faithful Companion for taking care of my Pepper and bringing her home to me so quickly. Thank you for your thoughtfulness, sympathy and support. You will never know how much it means to me, my family and most of all Pepper