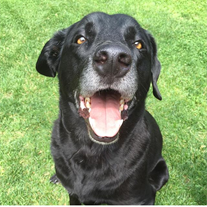 Rocky was loved by everyone that happened to meet him. He was friendly, comfortable around strangers, and our side of the neighborhood even called him (and his little brother Yogi) Main Streets greeting party. Though, if someone approached the house, or even if we were wrestling inside, he would bark and protect us, and if he was calm you knew everything was okay. He was a lover of walks, car-rides, tug-of-war, and he would do anything but a back-flip to get some sort of treat. He would let us know if he wanted to go outside, if he was hungry or thirsty, when he wanted to get on the couch, and he was sure to let us know when he wanted to play. Rock could learn a trick within an hour, and once we did two pats on whatever piece of furniture it was that he wanted to get up on, he wouldn’t hesitate to jump up and cuddle. Rocky was loyal, compassionate, cuddly, humorous, playful, intelligent, comforting, shy (and stubborn), and friendly, but still fierce. He will be missed by many, and he is loved forever and always. Til we meet again bud. I hope you’re having a blast while you look down on us with your beautiful amber eyes. Thanks for being the best companion and friend a person could have boy.