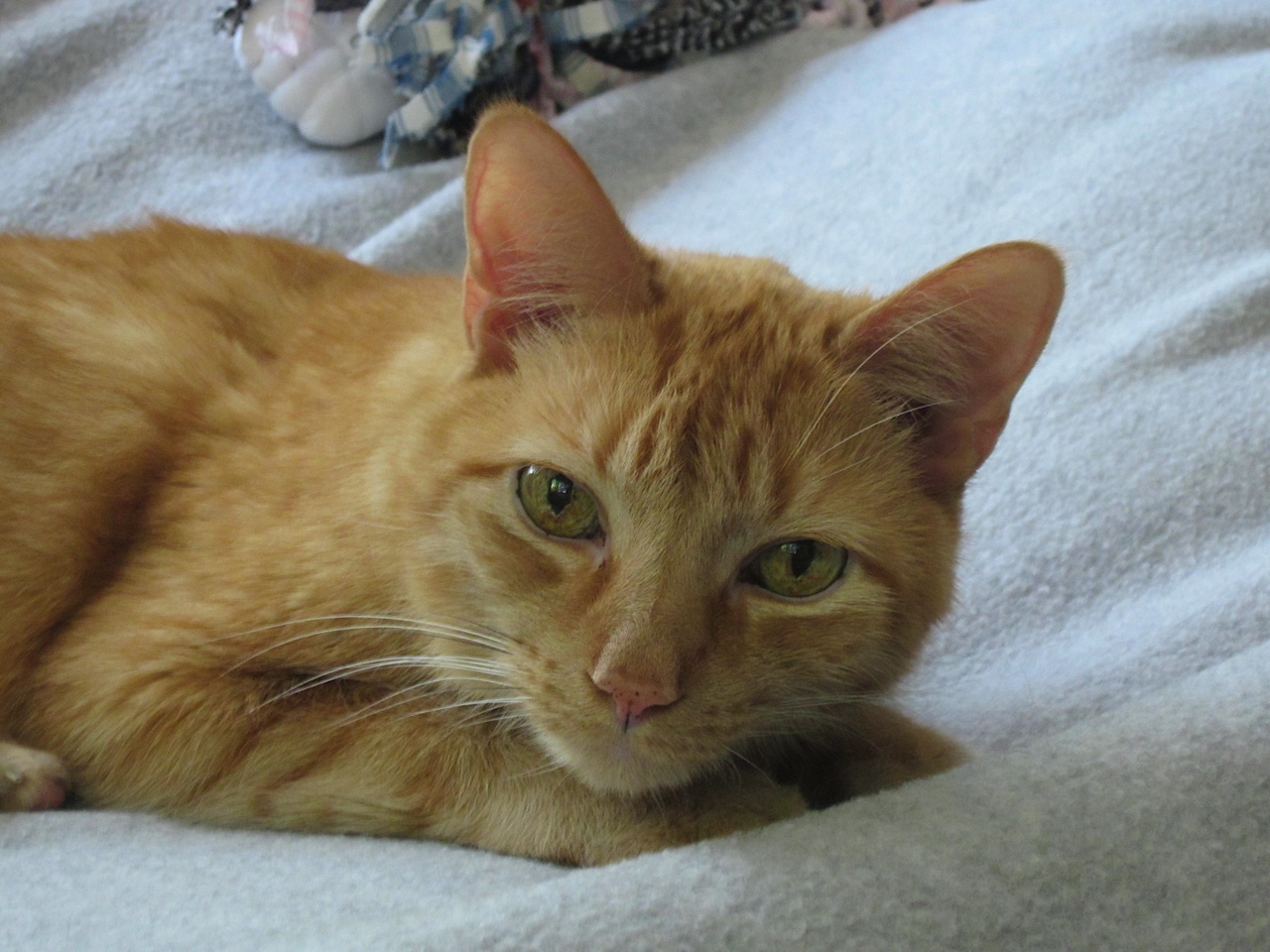 We adopted Mr. Peach on April 14, 2006, from the Michigan Humane Society. He and his sister, Lucky (now know as Miss Kitty) were seven years old and had to be adopted together. Miss Kitty is solid black and they made a striking duo when I found their pictures on the MHS website. Within an hour, we were on our way to see them.

It had been nine months since we lost our 20-year-old silver tabby, Chessie, and I was finally ready to consider adopting another cat. Admittedly, we were a little apprehensive about adopting two senior cats but we felt that they would, at the least, be companions for each other when we weren’t home. A few minutes in the get-acquainted room didn’t have me convinced. Lucky was more interested in the passers-by on the other side of the glass. Finally, I picked up Mr. Peach (even though his paperwork said that he didn’t like to be picked up) and put him on my lap. After a few pets, he purred softly and, at that moment, I was convinced that they needed to come home with us.

When we brought them home, they seldom left each other. It was almost if they were Siamese twins. After a couple of weeks, they became more confident of their surroundings. In short order, they adopted us! Miss Kitty preferred my wife’s company and Mr. Peach preferred my lap. During the years that followed, Mr. Peach and I spent MANY relaxing hours on the recliner. His usual position was between my knees so that one hand could pet his tummy while the other stroked his back. Eventually, he got in the habit of sitting next to chair and meowing, as if to say “It’s chair time, Daddy.” And I always tried to accommodate him when he did this. Mr. Peach also followed me through the house a lot, and whenever I sat down, it wasn’t long before he was in my lap and purring loud enough to rattle the windows.

Fast forward to August, 2012. There were increasing signs of intestinal problems and a visit to Gasow’s resulted in a referral to Oakland Veterinary Referral Service where there was a staff of specialists to evaluate his case. The Internal medicine specialist recommend that he have an ultrasound as the first step. That led to a recommendation for exploratory abdominal surgery to determine if he had cancer. Unfortunately, the diagnosis was intestinal lymphoma. However, the Oncologist told us that treatment with Prednisolone and Leukeran (a chemotherapy drug) had good outcomes in prolonging quality of life. He remained on this therapy until July 7 when his personality changed. He became lethargic and his intake of food and water diminished drastically. Another visit to OVRS revealed pancreatitis but his pupils were very dilated which became a major concern. A whirlwind week of more specialists led to a diagnosis of a neurological problem but they couldn’t be more specific than that. It seemed to us that Mr. Peach’s super personality had gone. After a CT scan was inconclusive, we decided that he had endured enough needles, poking, and probing.
On July 12, 2012, we went back to OVRS to be with him for his final moments. After holding him on our laps for about 15 minutes, we gave the doctor permission to proceed. At 11:20 PM, he slipped away, the tension leaving his body as he was freed from the pain and suffering.

We like to think that we saved the lives of Mr. Peach and Miss Kitty in 2006 when we adopted them. And though we loved him for only 7 of his 14 years, we feel that we compressed 14 years of love in those 7 years. Miss Kitty survives and hopefully she will share her love with both of us now. It’s going to take a very long time to get over the loss of Mr. Peach.
My wife added this poem about Mr. Peach and me:
Just a cat
Yes, he was just a cat
A cat who followed a man
Around a house
A cat who meowed for the man
To sit in his chair and make a lap.
A cat who rattled the windows
With his purrs
A cat who stole the hearts of two
People who loved him
A cat who left too soon
And was
Just a cat.