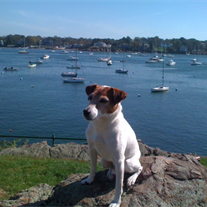 Memorial to Buzz, our unusually calm and quiet Jack Russell.

He was a very funny snuggly creature who gave more love than his little shape should have been able to hold. He was a rescue, found bruised and abandoned by the side of the road in Acton Maine, and we adopted him on the summer solstice, June 21, 2004, and that was his birthday to us. He more than filled the void left by the passing of our last Jack Russell, Alice. Even weeping, I still laugh when I think of his running, with crazy legs splayed out to the side as he looped figure eights, seemingly through the air.